Riyadh Province is the capital of Saudi Arabia and central to the Kingdom of Saudi Arabia for several reasons: geographical, historical, political, and economical. it is the second largest province in terms of both the area and the population. Riyadh, the birthplace of modern Saudi Arabia, where old-world charm meets 21st-century vision. Riyadh Province – also known as Al-Wosta – is home to the country’s capital: a modern metropolis with a thriving financial and business centre, and a growing cultural scene. It’s a city rich in history, boasting myriad forts, palaces and museums, and some of the country’s most colourful souks. 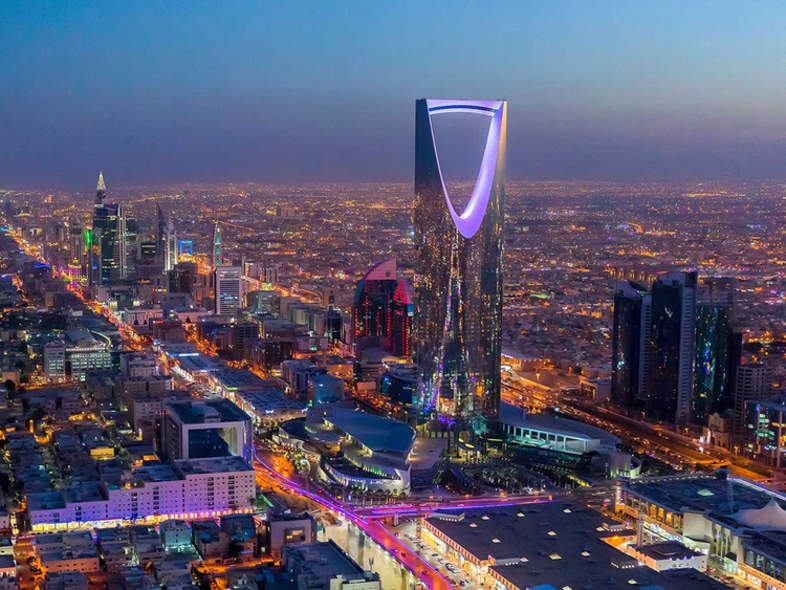 Welcome to Riyadh, the birthplace of modern Saudi Arabia, where old-world charm meets 21st-century vision. Riyadh Province – also known as Al-Wosta – is home to the country’s capital: a modern metropolis with a thriving financial and business centre, and a growing cultural scene. It’s a city rich in history, boasting myriad forts, palaces and museums, and some of the country’s most colourful souks.

Today we will be welcoming you at the airport as our guide will be waiting for you holding a sign with 88Destinations on it , we will betaking you to your hotel where you can rest and start fresh the next day . 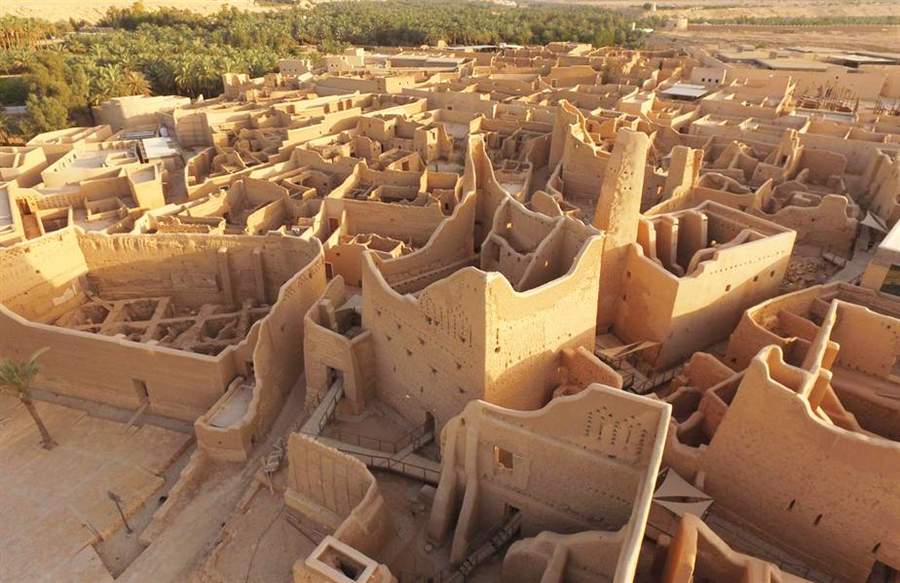 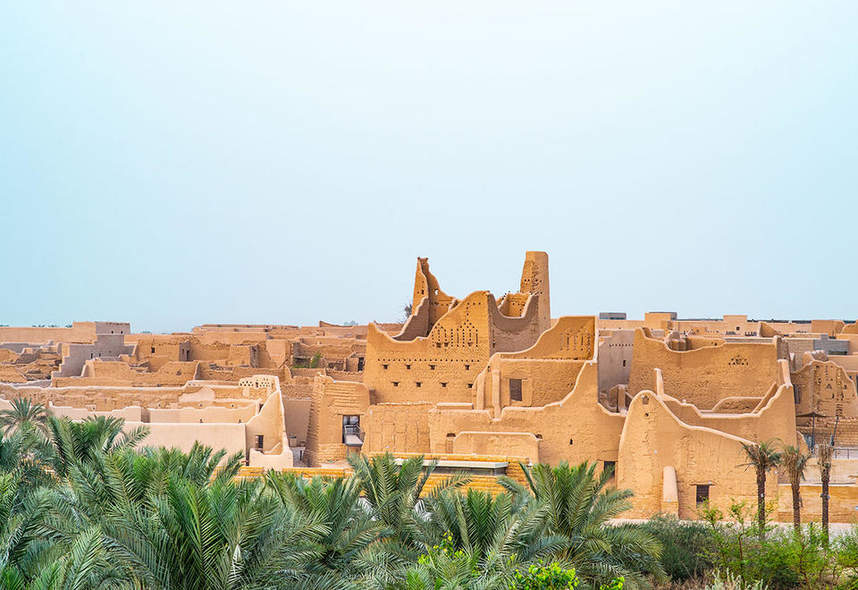 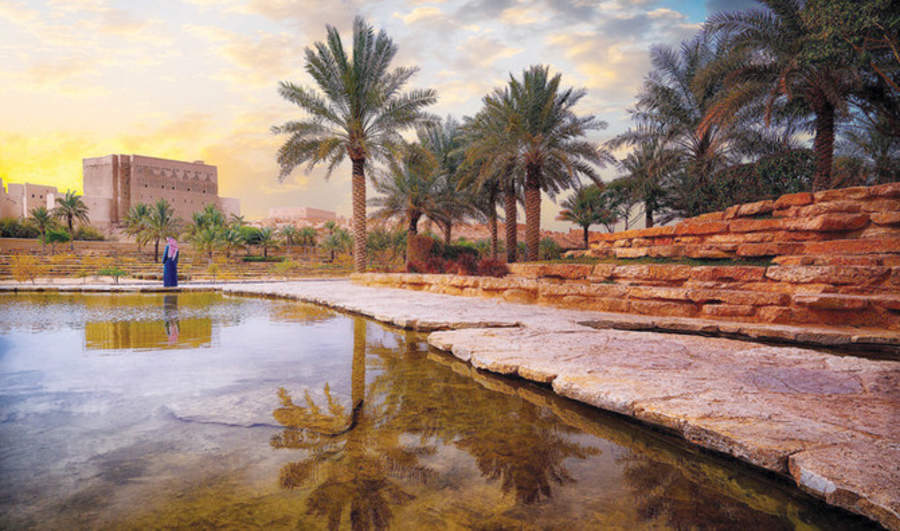 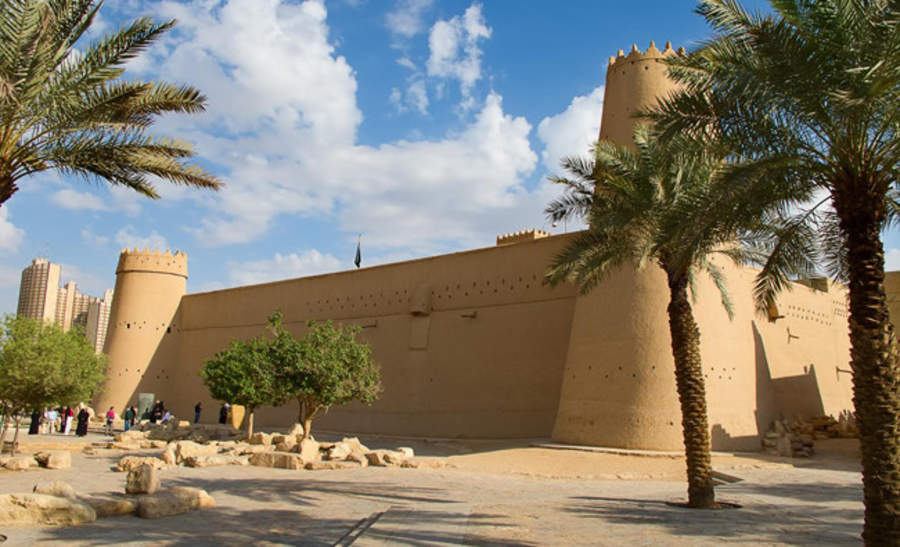 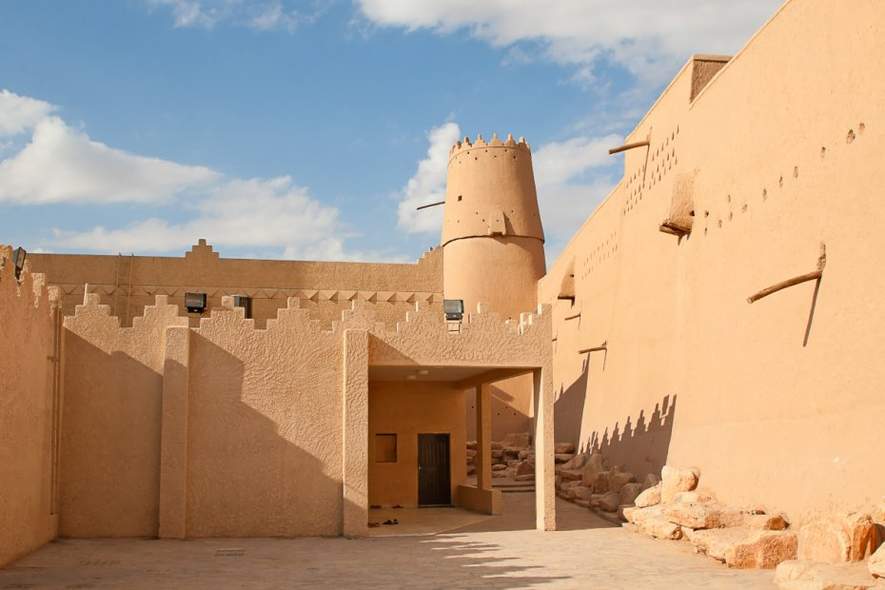 starting with Al Masmak Fortress ,Surrounded by sand, this squat fortification was built around 1865 and is like a scene out of the movies: a big fortress representing an empire. It was the site of a daring 1902 raid by Ibn Saud, during which a spear was hurled at the main entrance door with such force that the head is still lodged in the doorway. Highlights among the exhibits include maps and fascinating photographs of Saudi Arabia dating from 1912 to 1937, in galleries converted from diwans (living rooms). The roofs are covered with painted palm-tree, taramic and ethel wood and exude an old-world charm that evokes an Arabian painting. Inside, the information panels and short, chest-thumping films on the storming of the fortress and the ‘reunification’ of Saudi Arabia are reverential towards the Al Sauds but worth watching nonetheless.

the we will be heading to Ad Diriyah , northwest of the city and the original capital of the first Saudi state is a must-see. Its Al Turaif quarter, a carefully restored mud-brick district that was named a UNESCO World Heritage Site in 2010, offers a glimpse into the country’s extraordinary heritage, while the Al Bujairy district is perfect for families, with its twisting lanes, restaurants and cafés. 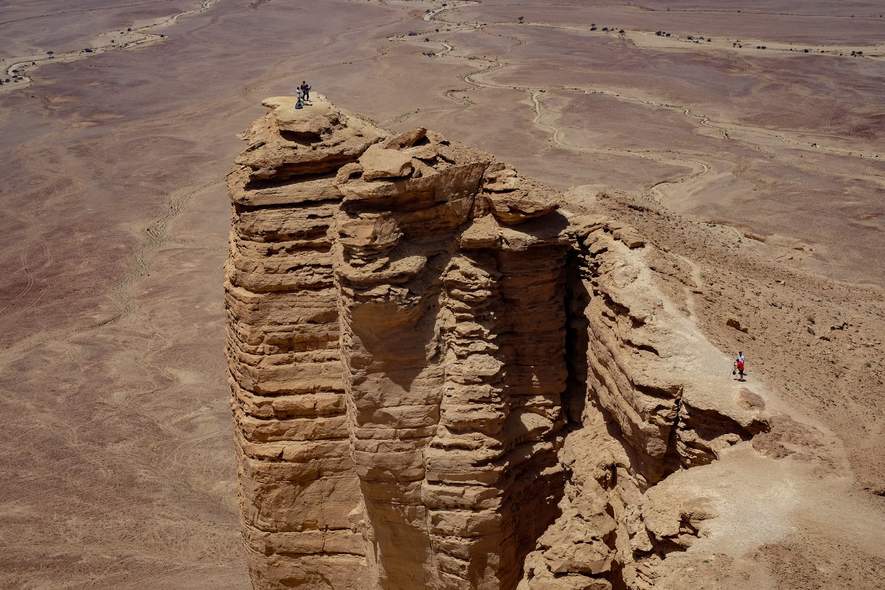 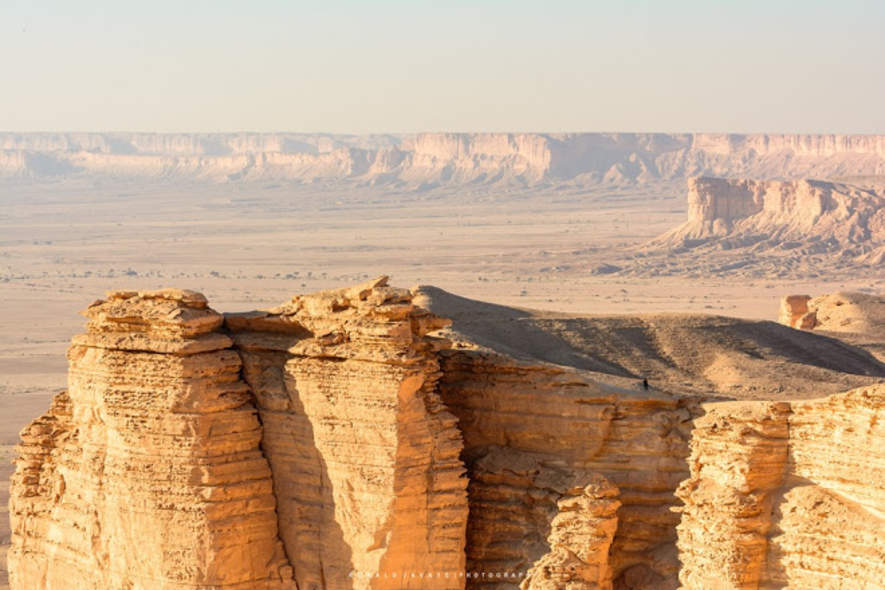 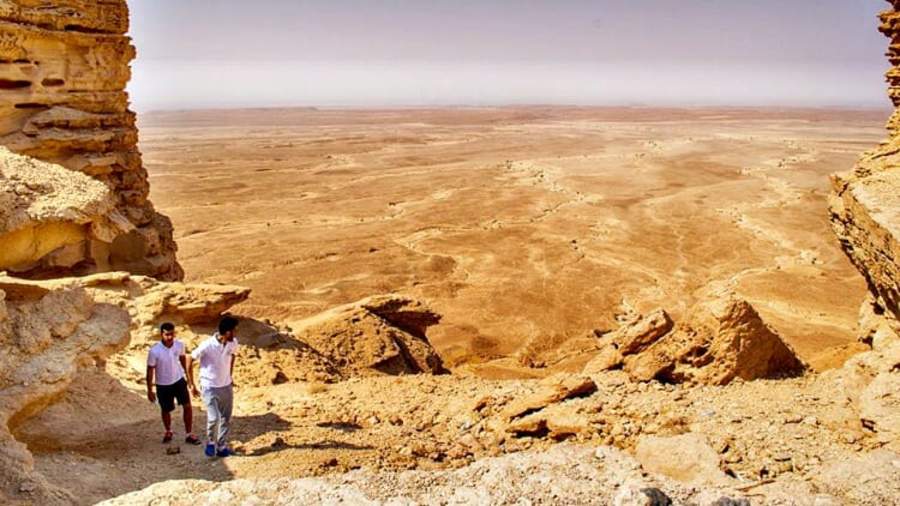 today is for those in search of tranquillity we are heading north of the city to the Edge of the World, where the sprawling Tuwaiq escarpment offers heart-stopping views over the arid plains below. we will be taking our 4x4 and enjoy our ride to this amazing place where we are going to set up our tents and enjoy our traditional saudi lunch on the edge of the world , The Edge of the World (whose real name is Jebel Fihrayn) has become within a few years one of the most popular destinations around Riyadh  the capital of the Kingdom of Saudi Arabia. This “nickname” was given because of its main attraction that are the stunning viewpoints from the top of the 300-meter-high cliffs overlooking the surrounding plain. This escarpment is part of the much longer Jibal Tuwaiq which is one of the most prominent natural features of Saudi Arabia as it spreads over 1 000 kilometers from the province of Najran on the south up to Qassim in the north. It even played an important role in Arabia’s History as along its foot was one of the ancient caravan trade routes that used to cross the Arabian Peninsula from Yemen into the Levant and Persia.

if you're a fan of hiking then this is you're lucky day as nowadays some travelers built several trails along the cliffs allowing access up and down the impressive escarpment. Some of those stone-made trails are still visible today like at the Khashm Zubaydah, 50 kilometers southeast of Edge of the World. so you can pick one of these trails and have your fun ! 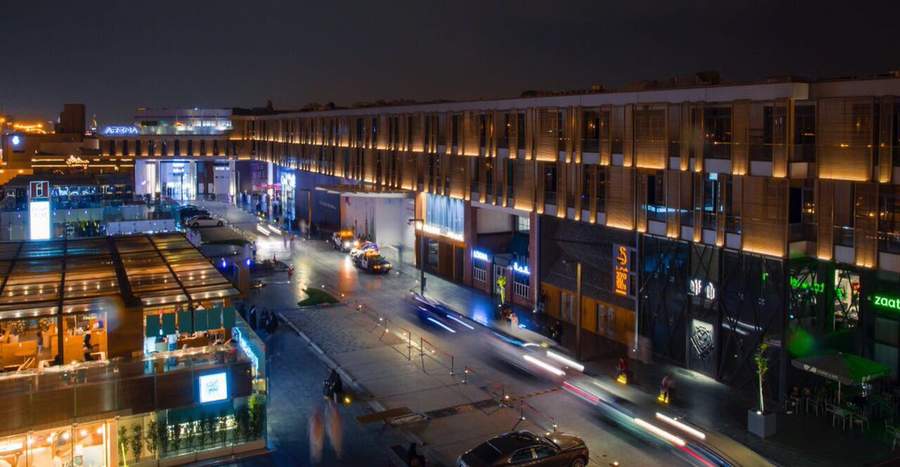 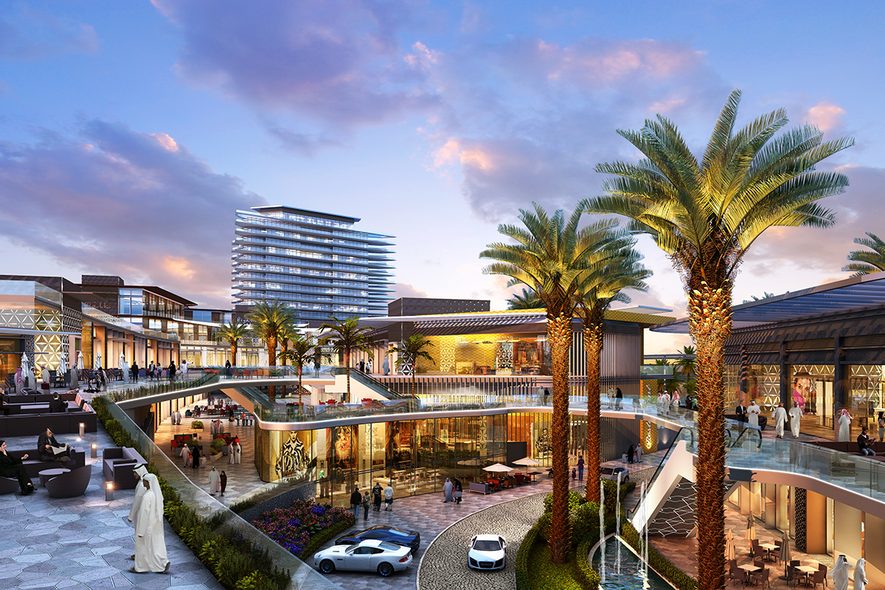 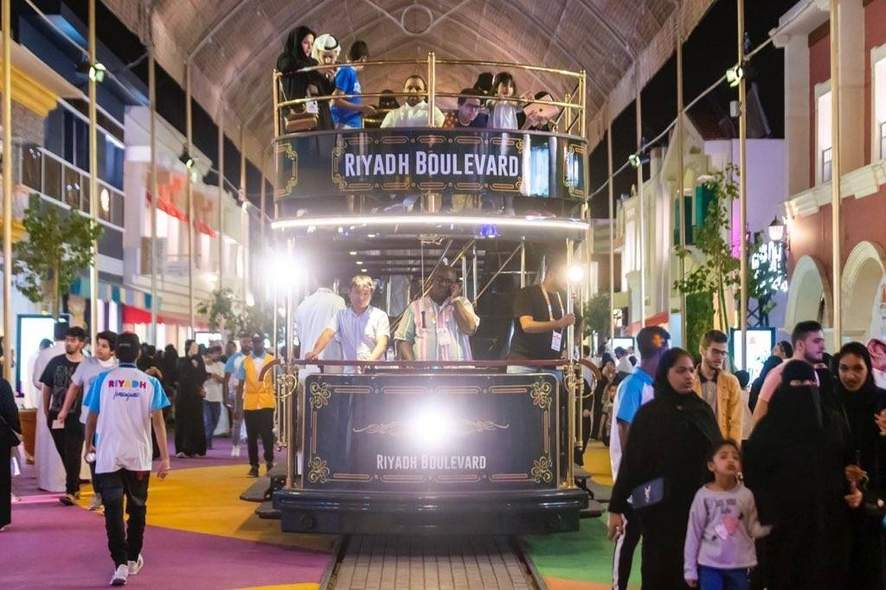 Today is a free day to enjoy it the way you want , you can go shopping in the local traditional markets or you can go to the modern side of Riyadh and check out the big malls and boulevards , you can also find the fine dining restaurants that are world wide famous . For transportation you can use Uber or Careem (our local Uber) or you can just ask for a taxi .

Today where we say goodbye to beautiful Riyadh , we will be dropping you off to the airport according to your flight schedule .